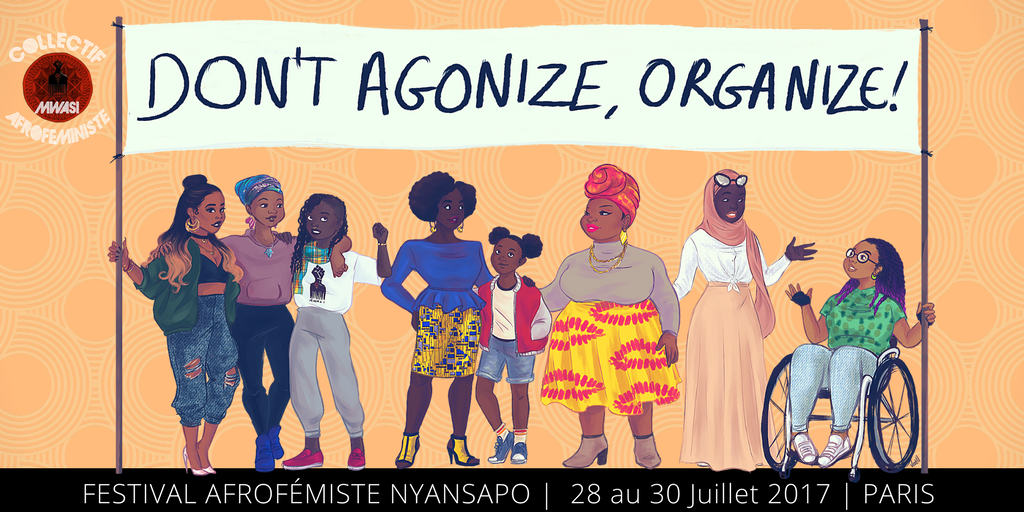 NYANSAPO Festival: To Have the Nerve to be a Political and Autonomous Afro- Descendant Organization

As a reminder, we’re organizing workshops for black and mixed women on racism, hetero-patriarchy and capitalism. Well then. With this in mind you can reread the first paragraph and then let out a sigh of relief.

Apparently, in 2017, in France, the idea that afro-descendants are organizing politically and autonomously is so intolerable that it warrants an online harassment campaign and threats from the authorities to cancel the event. Well, that’s not exactly right. In 2017, in France, you can have gender/self-segregated feminist gatherings amongst women. There some risk of some criticism from men who don’t understand why they can’t come share their invaluable opinion on the status of women, but you can still get subsidies from Paris City Hall, as is the case for Maison des femmes, where men can not enter. You can organize feminist festivals reserved for women, such as Cineffable, and get funding from Paris City Hall.

We want black women of course – to discreetly clean our offices and watch the kids while we put in these high-powered executive hours.

Black women organizing themselves politically, coming together and sitting down to define agendas and strategies of struggle and resistance – much less pleasing.

Nor where we surprised by the reactions of some. Extreme right-wing trolls that get themselves into a lather at jeuxvideos.com, who plan group attacks and compare us to two or three animals while they’re at it – unfortunately we’re used to that.

It logically follows that these trolls and extreme right-wingers find an open ear at Paris City Hall. Left racism has this odd trait of wanting to keep discussion of anti-racism strictly within the discourse of morality. As the left is all that is good in the world, being “humanist” and “universalist” it is quite normal for it to know better than we what to do or not to do against racism. And defying all logic, when taking into account the history of the left in terms of colonialism, racism and co-optation of immigration struggles.

On May 29, 2017, Paris City Hall rushed to tweet that it will not only shut down the event but that it plans to sue us for discrimination. In Anne Hidalgo’s tweet, our workshops reserved for black and mixed afro-descendent women are transformed into “forbidden to whites”, and as our brother Joao Gabriell noted: “Put simply, this is the umpteenth element of proof that it’s not self-segregation in of itself that bothers these people, but rather the absence of white people –  supposed to incarnate the universal – according to their eurocentric vision. That is to say that from the moment you displace white people, its an attack against their role of reference point around which everything must turn.”

This controversy is useful in that it allows us to document what the word “discrimination” means to the Statist left and to organizations championing moral anti-racism (LICRA, SOS Racisme). All this to say: there’s work to do. Apparently, you can discriminate against someone by simply telling them that they can’t do a certain thing.  Gone is the fact there there are relationships of power, social assignment, political, economic or cultural domination, the purpose of which is to prevent these groups from accessing resources (employment, housing, education, etc.) and areas of social value or power (political power, etc.).

The small problem in their “Be still my heart, and still these black wenches’ tongues” plan is that we’ve already been there. This circus came through town last year, for the first edition of the Decolonial Summer Camp. City Hall can’t cancel our event since the self-segregated workshops take place in private locations. Events happening at La Générale are “open to all”. We were quite surprised to read a tweet from Anne Hidalgo congratulating herself for her firm intervention that brought us to heel (which was weird, since “firm” wasn’t really their tone on phone), followed by a tweet saying that the self-segregated workshops will be held in private locations. From the two tweets one would think this came about as a result of said “intervention”.

However, Ms. Hidalgo, the Internet remembers, as do people. Our promo about the festival came out several weeks ago. The festival web site and program are older than your tweets. Anyone can verify chronologically that no changes have been made to the program.

Thank you for your wonderful #SuiteAMonInterventionFerme and #TweeteCommeHidalgo, which gave us a good laugh in these difficult times.

Self-segregation is a tried and true activist tool. Since last week, in response to some fairly aggressive comments, we pointed people towards a comic book on self-segregated spaces several dozen times, or to this piece by Christine Delphy. The accusations of being segregationists show people’s deep misunderstanding of the fact that self-segregation is not a goal, but a tool, built on decades of activist understanding and analysis of effective feminist, anti-racist, anti-LGBT-phobia, etc. struggles. Any person who ever became involved in these activist movements can quickly realize that these spaces, which one would think are finally spaces of free expression for the minorities affected by these oppressions, often remain spaces defined and controlled by the majority. Which is why associations such as LICRA, SOS Racisme and others don’t really like being reminded of the strangely uniform color of their decision-making bodies. The highjacking of political struggles is a historical and systematic occurrence, used by the dominant system to protect itself, undermining resistance movements at the root. Depoliticize discourses, impose the white and majority view on issues, to impose men’s emotions, issues on feminism, and so on.

What do we do in our self-segregated spaces?

Some people, surely wanting to help, began to make very unflattering comparisons. “You attack the festival but have nothing to say about identity-based clubs in Lille!” Do we really need to spell out that we’re not quite happy with this completely misplaced comparison? In this case these are spaces controlled by the far right and white supremacist movements, spaces in which a racialized person would literally be in danger, spaces devoted to the development and reinforcement of racist, sexist and violent homophobic theories would literally be in physical danger .

The self-segregated spaces we’re setting up allow us to reflect on our organizing as a political body on issues such as police violence, rape culture, homophobia and transphobia, discrimination in employment, housing or education. They are also spaces for the transmission of knowledge and theoretical production on the history of afro-feminist struggles, Afro-Caribbean anti-colonial struggles, Pan-Africanism, anti-capitalism. Finally, these spaces are also places to learn how to take care of ourselves, how to remain proud and loving of our communities, our bodies, how to transmit the history of afro and afrofeminist struggle to children and buffer their self-esteem, and many other things.

The funniest thing is that these scandalized reactions to self-segregation in some of the festival’s workshops have in fact reinforced everyone’s opinion on the need for self-segregation (re-read the first paragraph if necessary). We can just imagine a workshop interrupted by A who thinks that “racism exists only if you believe in it“, by B who declares that we are racist because we dare “differentiate between black people and white people“, by C who wants to share”[his] deep understanding of Africa and Africans” because he lived in Mali for two years, D who is convinced that “if you work hard, racism doesn’t matter“, E who “doesn’t see a difference between people anyway“, F who “has read a lot about the history of slavery and could teach [us] a few things”, and we could go on for days and days. (All these examples come from real comments, tweets and messages received by Mwasi since the beginning of the controversy). When you see all this you really have to wonder why would folks want self-segregated spaces in the first place?..

The same thing happens when you see the misinformation tweets coming from otherwise credible institutions, the many reports and press articles that repeat, without questioning the accuracy of the source and the facts, the loaded phrase “festival bans white people”. Generally speaking media coverage of activism is deplorable and reductive. Fortunately, we saw many quality articles in the foreign press, which could often be summarized by the phrase: “What the fuck, France?“. As with the Burkini, as with the wearing of religious symbols at school, as for the majority of French-from-France debates on everything related to population “diversity”, we were comforted by foreigners’ real confusion when encountering “French neuroses” that lead to unjust and absurd situations.

We believe that we do not have to hold our self-segregated activities in hiding, on the down low. To know that the oppressions we are face are collective experiences and that we therefore need to collectively organize against this system.

We therefore send all our love and support to black and mixed afro-descendant people who have had to indirectly suffer the repercussions of this racist offensive; people who like us have been exposed to simultaneously racist, sexist and homophobic comments, tweets and violent messages.

We thank all those who have shown us their support, with the hashtag #JeSoutiensMwasi, with messages, with gifts. Starting with the former members of the collective, especially its founder Sharone. We thank the Afro-feminists active on Twitter (you come first), Black Atlantic Twitter that came together from the United States to Britain, by way of Kenya and Haiti (#BlackOnBlackLove), activist groups, associations, and personalities who have supported us unswervingly, from La Générale to Black Lives Matter, not to mention Maboula Soumahoro, Rokhaya Diallo, Françoise Vergès, Amandine Gay, Gerty Dambury, Leonora Miano, Zahra Ali, Sihame Assbague, Many Chroniques, Alice Coffin, Sylvie Tissot, Océanerosemarie, Christine Delphy and all others.

From controversy to controversy, from intimidation to intimidation, racists and shopkeepers of moral anti-racism do not seem to understand that their aggressions only reinforce our determination to organize autonomously. We know the road will be long, that there will be other battles, but we will not fight them alone.

No comments yet. You should be kind and add one!